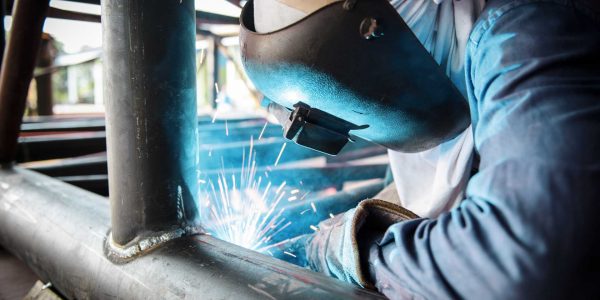 Reducing the Risk of Manganese Exposure for Welders

Thinking Beyond Regulatory Requirements   Manganese is one of the most toxic metals commonly present in weld fumes. The current Occupational Safety and Health Administration (OSHA) permissible exposure limit (PEL) for manganese is 5 mg/m3 for general industry[1]. But the American Conference of Governmental Industrial Hygienists (ACGIH) and many researchers are recommending exposure limits that […]

In the search for industrial ventilation systems, buyers are typically met with similar marketing language for every make, model and solution. “Optimized cartridge cleaning system,” “high-performance collector,” and “industry-best warranty” are typical phrases. But what does that really mean, and how do those things translate into actual system performance – both now and down the road?

This weld fume management guide, Finding the Right Weld Fume Extractor for Robotic Welding, will touch on a number of considerations to think about as facilities decide on the appropriate clean air technology for their robotic welding stations

To counter the trend of a shrinking welder pool – as many as 400,000 operators by 2024, the industry is taking a three-pronged approach: training more operators, helping existing employees build skills, and educating existing manual welders to operate automated systems.

Source capture weld fume extraction is the most effective method of keeping smoke out of the welder's breathing zone – an incredibly important task given the dangers of weld fumes. Ventilation at the source…

Armed with a knowledge of the dangers of weld fumes, you know it's important to capture toxic particulate at the source before it has a chance to enter the respiratory zone. The trouble is, you or the welders you oversee are constantly on the move…

According to the American Welding Society, 40 percent of manufacturing companies have declined new clients due to a lack of skilled workers. Fewer high school graduates are joining the technical trades, and the average age of welders today is 55 – on the verge of retirement. How can manufacturers respond? Automation.

In laser welding, a series of intense, highly-focused light beam pulses quickly heat and melt weld material instead of typical filler. Given the tightly focused nature of the laser beam, heat transfer is minimized to the weld location meaning parts can be handled almost immediately.

How to Choose a Dust & Fume Collector

RoboVent's Recommendation: 5 Things to Know to Make Sure You Don't Get Burned. When it comes to buying industrial ventilation equipment, it can be difficult to properly evaluate a dust collector's capabilities.

Although weld-fume extraction systems should first and foremost consider a welder's safety, it shouldn't needlessly drain the company purse.

A lawsuit centers around exposure to Manganese and the fumes produced during welding operations. What does this mean for the Welding Industry? Is the verdict a harbinger of what's to come?

Why Doesn't My Fume Extraction Work?

Over 50% of the fume extraction systems installed in the welding industry do not work as well as intended.